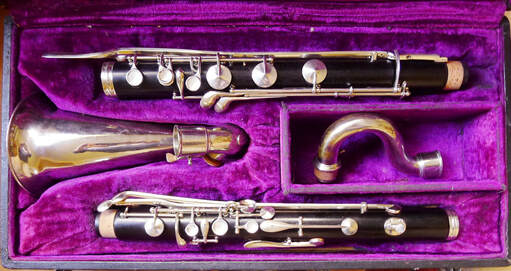 Antique Italian Albert System Bass Clarinet
"Who made all those old clarinets and saxophones that I see on eBay and why should I care?", folks ask the Vintage Clarinet Doctor.

Well, some are "stencils": instruments made by well known manufacturers under other names, generally for big distributors (like Carl Fischer of NY) or big music stores (like Grinnells). Some of these are basic designs or mass produced models and some are fine playing clarinets!

The others were made by companies that never got much press, weren't in business very long, weren't routinely imported to America, etc. Below is an ever growing list of my favorites: Obviously, not every one will be a gem (depending on model, how they were treated, etc.), but I've worked on almost all of these and been anywhere from 'pleasantly surprised' to 'very impressed'. For a few hundred dollars, you can own a nice sounding/playing piece of history and use the other thousand for something else! 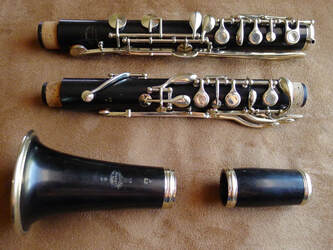 H. Bettoney - early/mid 20th American maker. Originally a clarinetist, went into the clarinet and flute business in Boston MA. Made nice silver/wood flutes and piccolos and a fine 'Columbia' model clarinet that I just overhauled.

Boosey&Hawkes - Formed in England the early 1930's from Boosey& Co. + Hawkes & Son. Makers of some lovely, underrated and underpriced instruments. I just overhauled a 2-20 model and its a good player!

Borgani - A very old Italian maker, and still in business! Excellent reputation for saxes, but still trying to get my hands on a clarinet.

Buffet Crampon - one of the most famous French clarinet makers, dating well back into the 19th century. Older instruments are excellent, especially early R13s. Modern instruments are expensive and lacking in tonal character, in my experience... 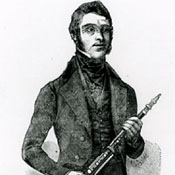 Cabart - Paris, since c. 1893; brand name used by Thibouville-Cabart c. 1893-1948 for top quality instruments.  The company was sold in 1948 and liquidated in the early 1970s.  The brand was acquired by F. Lorée who c. 1974 gave this name to their student instrument line. Some nice old clarinets!

Fernand Chapelain - was in La Couture Boussey 1890-1917.  They were succeeded by Siour Chapelain 1917-before 1959.  In the latter time they made some clarinets under the two names hyphenated together.

Conn ﻿﻿-﻿ ﻿Major American maker. Some nice large bore clarinets in the 40's, choice of Artie Shaw, among others!﻿﻿

Couesnon - French company that has been in business for over 170 years! They used to make brass and woodwinds, and now just make brass. Their old clarinets and saxophones are a real joy and readily available for low prices. The Monopole Conservatoire is the high end model. Successor to Gautroit aîné; stopped producing woodwinds in 1979 (now only brasses) 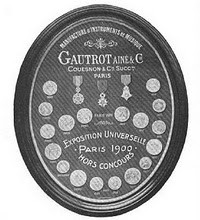 Paul Dupre ﻿- A French maker, mid 20th century as far as I can tell. Just finished one with his name and an Eiffel Tower on it: nice sounding instrument!﻿

A. Fontaine ﻿- Made by Couesnon!﻿ Paris, pre 1930- post 1964; USA export. Just finished one of these and was pleasantly surprised! Very even response through the registers - nice classical instrument.

Paul Gerard ﻿- French brand,﻿ Paris, c. 1950-1960; USA export; probably Malerne stencil. ﻿I overhauled one that was a really good sounding horn.﻿
Hawkes & Son ﻿- English maker that became part of Boosey & Hawkes c. 1931 but made some fine clarinets before then. I overhauled a Full Boehm model that was a joy!﻿

Kohlert - OLD company, which moved from the Austro-Hungarian empire to Czechoslovakia to Germany merely by being in business so long in the same location!  Great Albert and Boehm clarinets, bass clarinets, bassoons, oboes, and I don't know what else. Name is currently being recycled by a Vietnamese company whose stuff I wouldn't touch with a ten foot pole...(1/17) here's some rare dating information for Kohlert clarinets that i stumbled across on The Clarinet BBoard and wanted to share:

"Pre- WW 1 (1918): “V. Kohlert’s Söhne Graslitz”. The Bohemian border region belonged to the Austrian Empire. Most inhabitants, also the Graslitz instrument makers like Kohlert, Püchner, Keilwerth, and many others, were German

1918- 38: “V.Kohlert’s Söhne, Graslitz, Czecho-Slovakia”. The region was part of the new Czecho-Slovak Republic. According to New Langwill they were among the largest firms of WWI makers in Bohemia with workforce of 400 in 1929 and a 23- piece orchestra.

After Nazi Germany had, by the Munich treaty of 1938, taken over the German- Bohemian border region, it was: “Graslitz, Sudetengau”.

After WW 2, till about 1948, when the Germans (“Sudetendeutsche”) were expropriated and expelled by the Czechoslovak state: “V.Kohlerta Synobe Kraslice” . The former Kohlert workshops were then taken over by the state owned Amati company.

At Winnenden near Stuttgart, South Germany, they started their business again. The instruments were then stamped “Kohlert & Co. Winnenden” They had to give up, as far as I know, about 1980." 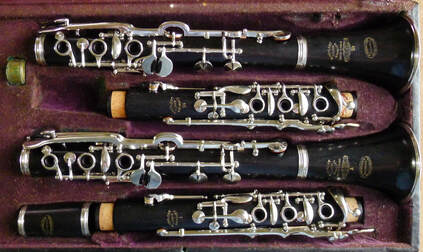 A. Lefevres - Paris, 1812-post 1911; one of the first French makers  to produce Müller system clarinets and to use rollers for the little fingers.  François Lefêvre was also, along with Printemps of Lille, to date his clarinets (only the Müller system ones, 1824-1829); this brand was used by all of François’ successors. I've seen both Alberts and Boehms and all were good quality horns.

R. Malerne - Another good French company, Paris, 1929-1975; successor to Lebret [Louis Lebret, Paris, 1888-1932]. ﻿Built good clarinets, oboes, bassoons, saxophones and I don't know what else; even the 'Standard' model (supposedly a student level horn) outplays a lot of the junk on the market today and is beautifully made.﻿ 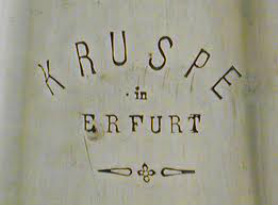 Martin Freres - a very old French company (have seen boxwood instruments dating to the mid 19th Century) : regrettably, the name is now owned by a Chinese company! Just finished a 1950's Supra which is a wonderful horn...

Noblet - Originally a French maker of repute, later a model of Leblanc. All the older horns (marked D. Noblet) that I've worked on have been fine instruments.

Orsi ﻿- A fine Italian maker, sometimes seen as 'Orsi Milano' or 'Prof. Romeo Orsi'. Made good clarinets, saxophones (stencilled as LaMonte, among other things), and I don't know what else. I just finished a c.1950 flute by them that is a wonderful player, for all of $39!﻿

Otello Milano - Another fine Italian maker, or possibly a Rampone stencil! Why don't you hear anything about these great old Italian companies? Overhauled one a couple years back and it was a lovely player...

G.L. Otterol - Paris, c. 1930, USA export. Don't know if its a stencil or not. Just finished an Eb sopranino that is a well made and good playing instrument!

Penzel Mueller - one of the best of the American makers, based in NYC. In business from c.1890 - 1950's. Mostly clarinets and good HR mouthpieces, although I've seen flutes with their name, which may (or may not) be German stencils. The Brilliante, Super Brilliante, Artist, and Studio Recording are all fine models and make good Jazz instruments: Woody Herman played the Artist model!

Selmer - the last member of the 'Big 3', famous French maker of clarinets, and one of the best: the Balanced Tone, Centered Tone, 55, Series 9...you can't go wrong with a good Selmer...

Thibouville - Great old French company based in Ivry-la-Bataille. pre-1913-1974; sub-contractors for numerous makers and  resellers (also seen as JTL or Jerome Thibouville Lamy). I've overhauled a few of these that were just wonderful, especially my 7 ring 'Artist' model. Long gone, but well worth investigating.

Triebert - Another old French company that built great oboes and bassoons.Overhauled a C Albert system for a customer and it was a sweet, solid player with nice key work!