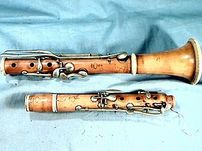 Antique Simple System Clarinet
Any of a variety of early clarinets, some having just a couple keys (late 18th to early 19th century) to a mid 19th century 13 key example like this Bb clarinet from France. These tend to have a very pure sound and play well in 4 or 5 keys (e.g. C, G, F, D and maybe Bb) and go downhill from there. Consequently, they were generally available in A, Bb, C, and Eb - although I've seen them in D and Ab as well! Great for early classical.

Antique Albert System Clarinet
This is a nice example of an early 20th century B Albert clarinet by Kohlert of Czechoslovakia. Similar to the previous model, but having in addition the front F, Eb trill, and rollers for the pinky keys. Eagerly sought by New Orleans jazz buffs as well as the Klezmer and Greek players mentioned above. Commonly found in A, Bb, C and Eb. A little more flexible than a simple Albert instrument!

Antique Full Albert System Clarinet
﻿Like the regular Albert but with all the Bells and whistles! From the top of the instrument: 4 trills, 3 rings.     Lower stack: articulated C# vented through the tenon, B ring, LH pinky G#. These were used by some of the best early Jazz artists and some symphonic players - just about as flexible as a modern clarinet with that dark, big bore Albert sound.﻿ 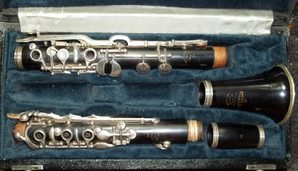 Antique Kohlert Oehler System Clarinet
Like the Full Albert but with some slightly different keywork. From the top of the instrument: 4 trills, 3 rings, extra banana key for F. Bottom stack, 3 rings, crossover F# and LH Ab/Eb.  These are only made and used (to the best of my knowledge) in Germany and Austria, and I've only seen a few. They tend to be quality instruments, with  flexibility similar  to the Boehm system by which the Oehler/Albert has been mostly replaced. Kind of like Heckel vs. French system on bassoon... 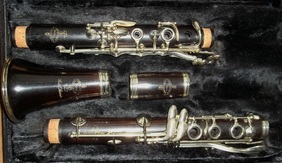 Vintage Boehm System Clarinet
﻿This is what most of us think of when we think 'clarinet'. This c.1950 Thibouville Freres has the Boehm keywork that originated in the late 19th century and continues as the standard today. Flexible, good intonation, used for Jazz and Classical alike. Still available in A, Bb, C, and Eb!﻿ 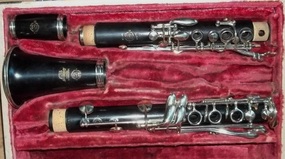 Vintage Advanced Boehm System Clarinet
This Boehm clarinet by Selmer of Paris has an Eb ring and an articulated C#, additions that facilitate certain passages, trills and sharp keys. Mostly used by symphonic players, but occasionally by Jazz musicians as well. Commonly seen in A and Bb. ﻿The end result of this line of reasoning is the....﻿

Vintage Full Boehm System Clarinet
This Leblanc has (in addition to standard Boehm fingering): articulated C#, Eb ring on the upper stack, LH Ab/Eb, and a low Eb like a bass clarinet! The low Eb allows an alternate Bb (instead of throat Bb) and covers the range of the A clarinet as well, allowing you to transpose music and not have to buy another $4k clarinet. The extra inch of bore scale to accommodate the low Eb also gives this instrument a larger, darker sound, much like an A clarinet. Sharp keys are a breeze to play, and you'll be able to kick sand in the faces of the 'keyless wonders' around you...